About Lustron Homes
Lustron-style houses were created by inventor and industrialist Carl Strandlund in response to a housing shortage after the end of World War II for the returning 12-million veterans.

The Lustron Corporation (based in Columbus, Ohio) created these mass-produced pre-manufactured homes from enameled steel. The factory was a former fighter-plane production site and the government gifted millions of dollars to get production up and running.

The homes had two-foot-square steel panels bolted to and covering a steel framework set on a concrete slab. Some interior panels were embossed to look like wood grain. These ranch-style homes had two bedrooms and offered an open living area – which is quite popular today. Homes included built-in storage areas in the kitchen, dining area and bedrooms. Heating was via a radiant-heating system in the ceiling. Homes were delivered as a “kit” of 3,000 parts on a truck.

Lustron homes were marketed for their durability and quality. They were homes of the future and meant to defy weather, wear and time. And, since they were premanufactured, they were installed within a couple of weeks. In April 1948 more than 40 model homes were created for cities across the U.S. and ultimately 2,500 homes were sold through 1951. (The average price in 1948 was $10,500.)

For those seeking a Mid-Century design, a Lustron home fits the bill. It embodies the modern design concepts in a small package. It’s a low-maintenance home (due to the steel structure and roof) and are considered to be a historic, unique design.

Can you find Lustron homes in greater Cincinnati? Yes, you can! Several were created for the area and one is currently for sale. This particular home was built in 1949 and has been owned by only two families –  and that family has passed it onto loved ones since the 60s.

This Middletown home is located across from the Wildwood Golf Club. You cannot miss its hallmark Lustron exterior.

A modern-style open living area features updated floors and original built-in bookshelves along with enameled-paneled walls. Flowing into the dining area there is a built-in china cabinet with plenty of storage shelving and drawers.

A pass-through opening in the shelving and you can peek into the kitchen which has lots of enameled-storage cubbies. The master bedroom is carpeted in neutral grey and features a wall of storage closets, drawers and vanity area. The second bedroom is also carpeted. At the back of the home is a covered patio overlooking a flat, yard. A detached, rear garage is oversized and the separate workshop (with electric) is a perfect place to store a golf cart or tools.

Will you be the only Lustron house on Aberdeen Drive? Sorry, there is another next door! 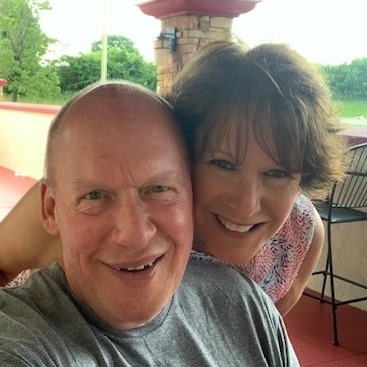 Lisa and Rob Fix (aka The Fix Solution) have been successfully selling real estate for years. They are Executive Sales Vice Presidents with Sibcy Cline Realtors and work from the West Chester office location. As a husband-and-wife team, they are laser focused on providing a seamless real estate experience to clients. Lisa brings over 40 years in relocation management and sales; and Rob (a U.S. Marine Corps veteran) has a real estate management and sales background. They are lifetime Cincinnati residents and enjoy golfing, gardening as well as rooting for the Reds, Bengals and FC Cincinnati soccer teams.