When Sibcy Cline REALTOR® Lynda Pohl decided to renovate a 40-year-old home in Oakley, she knew there would be challenges. “Nothing had been updated for 30 years,” she said.

Lynda knew she had her work cut out for her and ended up gutting the home down to the studs. “We took a space that had great bones and wanted to be imaginative with it,” she said.

The real work of imagining came into to play when Lynda needed to figure out an idea for what to do with an awkward space in the basement. “It was an entirely cement block room with no windows and a shower in the corner,” she said. It appeared that the room was originally the old coal chute in the cellar. Currently the basement room served no purpose except to house an extra shower.

“I thought, what can we do to make this really different, to make it really cool?” she said. That’s when she came up with the idea to make a hidden bourbon room. “It was something fun and different and bourbon rooms are popular right now,” she said.

The Key to Unique Hidden Rooms

To really make the room extraordinary, Lynda closed it up entirely and made it a hidden room that could only be accessed by using a key to open a bookshelf in the wall. “We went to Goodwill and found some old books on wine, beer, and whiskey for the bookshelf. We hollowed one out and put a key in it to open the bookshelf,” she said.

Lynda wanted the room to have an old world feel, so she found 150-year-old reclaimed barn wood to use for the paneling around the bottom of the room. For the top, she used a wall treatment of Venetian plaster, which gave the room texture and warmth. With the addition of some uplighting, the room has a cozy feel that belies its origins as a cold basement room with cement block walls.

To take the warmth up a notch, Linda added a bar top and counter made of live edge wood. A dual wine refrigerator, custom built-ins, and a Bluetooth stereo system round out the room and take it to the level of luxurious.

Transforming unused space in your home can serve a double purpose. For example, hidden rooms often double as panic rooms or safe rooms, Lynda pointed out. Homeowners build these rooms into homes to provide a space that is not visible or accessible to outsiders.

While it used to be only celebrities who built safe rooms in their mansions, the idea has now gone mainstream. Construction demand has increased as people feel increasingly threatened by world events. Consequently, underground bunkers like these have risen in popularity.

“You can have everything you need in a sealed off underground room,” Lynda said. In this case, “everything” includes your bourbon stash, and if you’re worried about an apocalyptic event, that could be a selling point.

Want to see the hidden room in action? Linda’s creation was recently featured in a Tik Tok video which has received over 280,000 likes and has been shared nearly 30,000 times.

More Creative Ways to Use Space

In addition to hidden rooms, hidden furniture is another way that you can be creative with space in your home. Watch the video below to see some DIY ideas and the latest innovation in hidden rooms and hidden furniture, like a dining room table that disappears into the floor!

There are many ideas for creating of hidden rooms in your home, from yoga and dance studios to kids’ play areas and book nooks, depending on your needs and desires. You can even make even a small space like a closet a hidden room, if you want to have a place to escape for safety or to hide valuables. It just takes some vision, planning, and renovation work to make your hidden dream room a reality. 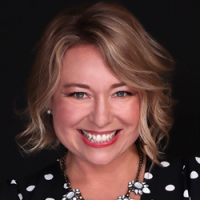 Lynn Bissell is the content strategist at Sibcy Cline and editor of Haus & Home Magazine. She lives in Lebanon, OH with her family and a Bernese Mountain Dog named Louie.